Bayer AG is a German chemical and pharmaceutical company that was founded in 1863 by Friedrich Bayer and Johann Wescott in Barmen, Germany. The company is one of the largest producers of aspirin and enjoys selling variety of medications for diabetes, birth control and multivitamins.

Although recently Bayer celebrated its 150th birthday, few people know about the dark history Bayer ranging from manufacturing poison gas (known as Zyklon B used in the gas chambers of Auschwitz) to producing mind alerting pharmaceutical drugs that can cause death.

The board members of Bayer Company are responsible for creating Federal Reserve and are well-connected with the Rockefeller’s and the second largest shareholder in Standard Oil. Few board members of Bayer were arrested and tried for their crimes against humanity during Nazi’s, however, as we see today, other members of its board continued the same agenda of Bayer’s mass chemical poisoning.

Bayer became a part of IG Farben (A German chemical industry conglomerate) that was involved in numerous war crimes during World War II. The company’s leader worked with the Nazi government to produce large quantities of Zyklon B necessary to gas millions of innocent civilians during the Second World War. Today, the dark history of Bayer’s involvement in such genocide has been long forgotten and Bayer market itself as a chemical and pharmaceutical company that has improved the lives of millions of people around the world.

After 1978, Bayer and other pharmaceutical companies produced Factor VIII and IX for people who are hemophiliacs (those with genetic disorder that their brood cannot clot to stop bleeding and as result a minor cut, they could end up losing dangerous levels of blood).

To produce Factor VII, Bayer had to harvest blood plasma from non-hemophiliacs, but in order to cut the expenses, Bayer collected blood from high-risk individuals (people who were in prisons, drug users, people with viral diseases like hepatitis and homosexual donors). Although Federal law forbids use of blood from high risk individuals, Bayer and other companies failed to comply and as a result thousands of hemophiliacs died from the HIV- tainted blood plasma.

Also, in 1990s, the federal government launched an investigation on Bayer’s unethical billing practices on Medicaid program and the Justice Department found Bayer guilty of fraud.  Bayer had to pay $14 Million to settle charges of causing inflated Medicaid claims. Every year, frauds like this costs taxpayers about $100 million.

The celebration ended quickly soon after numerous deaths starting with young and healthy women who had no other medical conditions and were taking no medications except Yaz and Yasmin.

According to the Coalition Against Bayer(CBG), Yaz or Yasmin have led to hundreds of deaths in young and healthy women. “The Coalition Against BAYER Dangers, which has been pointing out the dangers of Yaz for years, demands a ban on all contraceptive pills with a profile of increased side effects” says Phillipp Mimkes, a Board Member of CBG who wants Yaz and yasmin and others like it pulled from the market.

Despite all their side effects, Yaz or Yasmin still remain pretty popular among many women around the world. One of the victims of Yaz or Yasmin was Michelle Pfleger, a healthy 18-year-old college freshman from New Jersey who collapsed and died from cardiac arrest due to a massive blood clot after taking Yaz. Michelle was pretty healthy, physically active and a non-smoker.

Although many lawsuits have been filed against Bayer for downplaying the side effects of its birth control pills, Bayer continues to defend itself vigorously against these lawsuits and ignores to pay the families of the victims any compensation.

A report by GM Contamination shows that between the year 2006 and 2007, three varieties of unapproved GM rice owned by Bayer CropScience sneaked into the US commercial rice exports in more than 30 different countries. The report suggests that none of the three varieties of GM rice were approved for cultivation or consumption anywhere in the world. Since no GMO rice has been grown in US, it appears that the source of contamination belongs to the field trials of GM rice during mid-1990s and early-2000s. According to GM Contamination, the field trail of herbicide tolerant rice belongs to Bayer CropScience and its precursor companies Aventis CropScience and AgrEvo. http://seattleorganicrestaurants.com/vegan-whole-food/GMOs-contaminating-organic-crops-Dr-Vandana-Shiva-biorape.php

Hiding the side effects of Trasylol drug while 1,000 people died every single month:

The drug Trasylol was on the market for more than 14 years and was banned in 2006 after it contributed to thousands of deaths in patients every single month. Bayer that aggressively marketed Trasylol as safe made billions of dollars on pure profit until a 2006 study showed widespread deaths associated with Trasylol.

After the major study revealed a direct link between Trasylol and death, it took FDA and Bayer almost two years to take the drug off of the market. Later on it was revealed that Bayer had buried evidence of Trasylol severe side effects that did cost one thousands lives a month.

In a costly campaign, the financial beneficiaries of giant chemical, biotech and pharmaceutical companies have spend millions of dollars to kill GMO labeling movement and have attacked, demonized or threatened the findings of independent scientists and researchers that have linked GMOs to a wide range of health problems including cancer, infertility, organ failure and gluten-related diseases. How Chemical and biotech companies are turning into a nest of cockroaches that will always find a way to survive.

Bayer among the 6 giant chemical and biotech companies has spent more than $2 million to kill Prop 37 in California. In a very costly campaign in Washington, BayerCrop Science donated $591,654 to kill I-522. Find out the list of food companies who have been spending heavily to defeat GMO initiative labeling in Washington: http://www.seattleorganicrestaurants.com/vegan-whole-food/biotech-food-companies-spending-heavily-to-defeat-GMO-labeling-in-Washington.php

Here is a summary of Bayer’s dark history: 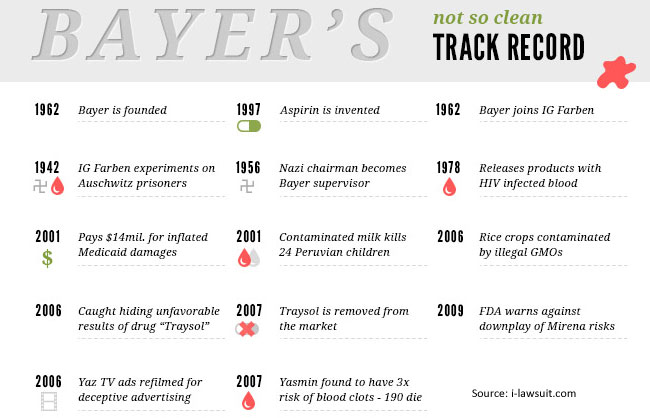