PEG in Covid Vaccines: the same compound reported by Corvelva in 2018 is indexed by Science 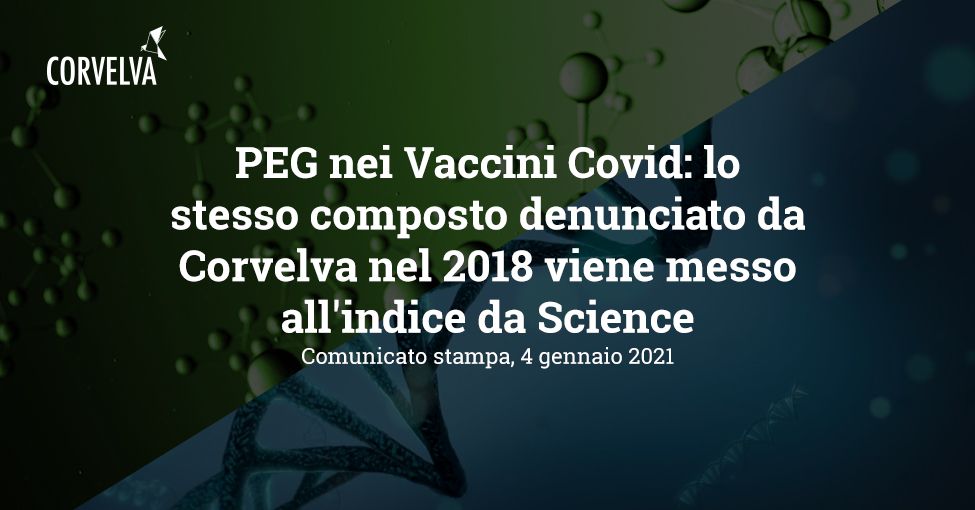 In recent days we have read with interest an article that appeared in the newspaper La Verità.1 Antonio Grizzuti’s excellent piece of January 3 dealt with an in-depth study published in the well-known scientific journal Science,2 which reports news of serious allergic reactions related to the Pfizer-Biontech vaccine.

We had already bought the article (by the scientific journalist Job de Vrieze), capturing an aspect that is fundamental for us because it is strictly connected to the vaccine analyzes we commissioned in the meantime 2017. Let’s try to explain ourselves better, assuming that we are not talking about problems of the anti-SarsCov-2 vaccine, but of a possible omission by the Italian and European control bodies of vaccines already on the market for years.

The Science article refers to “severe allergic reactions in at least 12 people who received the COVID-19 vaccine manufactured by Pfizer and BioNTech” and these reactions could be due to the vaccine’s main ingredient, polyethylene glycol (PEG). ”

This PEG molecule,3 reminds us of Science, it has never been used in vaccines before but is present in many drugs, some of which have occasionally triggered anaphylaxis (a life-threatening reaction that can cause skin rashes, a drop in blood pressure, shortness of breath and altered blood pressure). heartbeat). Some allergists and immunologists believe that a small number of people previously exposed to PEG may have high levels of antibodies against it, putting them at risk of an anaphylactic reaction to the vaccine.

What if we told you that we had alerted all the Italian control bodies, the Ministry of Health, the Higher Institute of Health and also the European bodies such as EMA of a possible PEG contamination in the hexavalent vaccine Infanrix Hexa, from GlaxosmithKline, already in 2018 and that has anyone done anything? Yes, on 14 December 2018 we notified all institutions of the possible presence of PEG in the vaccine analyzed, highlighting the fact that “the presence of formic acid in the form of sodium salt and a polymer resulting from contamination of Poly Ethylene was detected. Glycol (PEG) having an average molecular weight of 1340 Da. “4

We had not implied that it was good or bad, that was up to operators in the sector, but only that there was a possible contamination (many, to tell the truth) which if confirmed would have made this vaccine non-compliant.

Now let’s try to summarize the question very briefly: since 2017 our Association, Corvelva, which focuses only on the freedom of choice in the therapeutic field and in particular vaccination, with the arrival of the mandatory nature desired by the then Minister Lorenzin (Law 119 / 2017), decided to commission laboratory analyzes to be carried out on the main vaccines on the market in Italy. Let’s not go into the specifics of the analyzes now, but remember that the focus was on verifying their compliance with the manufacturers’ technical data sheets.

We have not only made everything public, but also asked for the intervention of all the Italian institutions; we also had a meeting at the Ministry of Health with the then undersecretary Bartolazzi, explaining all the problems encountered, always emphasizing that our analyzes were not conclusive, they did not put a firm point on anything but, as citizens and consumers, the our role was to present data and ask for checks from whoever was in charge of doing it.
Nothing in two years has been done by the Italian institutions. After many months of useless correspondence with those who should have carried out the checks, we presented a complaint to the Public Prosecutor’s Office of Rome and just a few days ago, on December 2, 28, after a request for archiving made by the PM and with our subsequent opposition, the analyzes commissioned by us were deemed worthy of further investigation and the judge in charge issued an order in which he indicated to the public prosecutor the need to proceed with the investigation.5
Of course, we are considered to be illiterate troglodytes and what we denounced has always been cataloged in the public opinion as “NoVax stuff”. Yet, we who are labeled in this way had already raised an alarm about a substance that really didn’t have to be inside those vaccines, and coincidentally it is the same substance that today is indicated as problematic in a new experimental vaccine, and Science writes.

Among other things, the PEG was not the first anomaly reported, unheard and then jumped to the news, just think of the massive withdrawal by the EMA of numerous batches of medicines (but not vaccines!) Due to the presence of nitrosamines, a molecule that we had highlighted as possible contamination within the analyzed vaccines, already in March 2019 … without result. These products continue to be marketed and administered as if nothing had happened.

It is inevitable that all this leads to a certain mistrust of the institutions. By now “the vaccine” has in fact become something ancestral, dogmatic, a real form of religion, on the other hand the slogan “an act of faith” has already been publicly used.

“The vaccine” is no longer a pharmaceutical, commercial product: anyone who dares to question is derided, hit, demolished. Yet people’s health is at stake, and sometimes certain facts are best explored first, because afterwards it can be too late. History is full of late interventions on alarms and complaints received and deliberately ignored, even in medicine.

Perhaps the time has come to focus on the real issue which is that of health and safety and protection of people, in the health field and beyond, setting aside this fideistic and maniacal narrative that seems to respond more to the need for guarantees on the product to be presented. as salvific, than to the real need for guarantees on the actual safety and efficacy of the same.

The health of the population must be protected, first of all by ensuring that the network of independent controls and checks that was initially set up functions.

In the same way, it is essential to protect the freedom of choice, i.e. the possibility of choosing whether to undergo a given health treatment or not, even more if in an experimental phase, moreover if authorized with reservations, moreover if to be administered not to cure but to prevent, and therefore with a necessarily more complex risk-benefit ratio to be defined and certainly to be established from time to time, case by case and this is true for all vaccines.

Perhaps the time has come to start doing real politics where it is needed and real medicine where it is needed, rather than trying to make up for a weak policy by resorting to coercion and obligations. The legal obligations in the health field are perhaps the most fearful and dangerous of all, because they concern the life and integrity of citizens: they are not tools to be used to lead ideological battles. We hope for a severe reflection on this.