EMF pollution – What is EMF?

Reblogged from source with Thanks Via: https://www.sott.net/article/295865-EMF-pollution-What-is-EMF 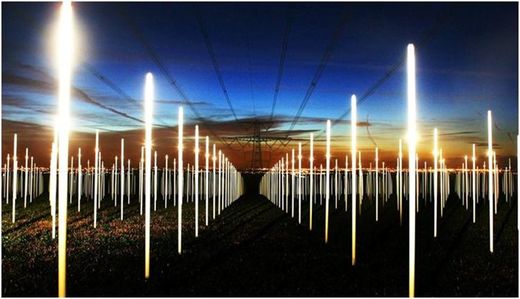 This article is part of a series of articles that will start with some background, proceed through a detailed description of man-made sources of EMF, discuss past study results, and finish with what you can do to measure your EMF exposure, and what steps you can take to minimize it.

What becomes a chronic disease condition, no doubt, has many potential causes including genetics, deficient diet, toxin exposure, and even repressed emotional expression.

Research over the past two decades has mounted in support of adding Electromagnetic Field (EMF) exposure to the top-level list of chronic disease causes (including genome damage).
It is likely that a chronic disease condition results from a unique and individual combination of these top-level causes, so EMF exposure should be considered in the context of other source causes as suggested in Figure 1. 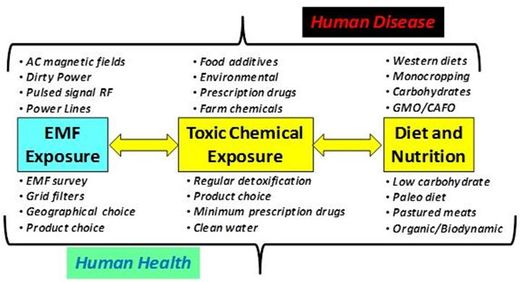 © Sott.net
Figure 1 EMF health effects in the context of diet and toxin exposure

These natural EMF background sources are associated with the cosmos, the sun and the planet, with each of these dominating various parts of the spectrum from extremely low frequency (ELF/ULF) to gamma rays of the very highest energy.
To the best of our collective knowledge, this spectrum has remained relatively stable over millions, perhaps billions of years with the exception of solar events (magnetic field effects) and cosmic supernovae (gamma radiation).

Only in the last 100 years or so has this spectrum come to be overwhelmingly dominated by the electronic products of an increasingly technology-based civilization.

For instance, in 1977 the average power density across 15 cities (dominated by the UHF/VHF bands) was found to be 50 million times greater than natural background.
Since 1977 we have seen an explosion of electronics, computers, and communication devices that have brought increasing levels of EMF exposure in the forms of dirty power (50/60 Hz), ELF AC magnetic/electric fields, and a huge array of wide-band digital RF (radio frequency) wireless signals.

Can we really expect that this exposure level to EMFs will have little or no effect on our collective health – not to mention all the plants and animals that depend on a relatively clean environment to thrive?

The latest independent and unbiased studies say no, there are measurable detrimental health effects in every category of EMF exposure – in plants, animals and humans.
Interestingly (or maybe predictably), many of those ‘scientific’ studies that measured little or no effect involved industry participation or funding.
These same industries stand to lose the most should the results reflect detrimental health effects due to EMF exposure and become widely disseminated.
Although the threat is clear, our collective fascination with anything from the latest iphone/app to the counter-top whiz-ma-jig, blinds us to the risks to our environment, ourselves, and especially our children – a situation where wishful thinking may prove very deadly indeed.

In the last two decades there has been a significant increase in the number of electro-sensitive (ES) individuals.

These patients suffer rapid deterioration in a host of symptoms after relatively short exposure times.
The effect is so direct and overwhelming that some of these people can directly detect AC magnetic fields, dirty power, and wireless signals in their environment.
Electro-sensitivity requires many such people to plan their trips carefully so as to minimize EMF exposure and thereby minimize recovery time.
This short description of ES may remind some readers of gluten sensitivity and the reference to the “Celiac Iceberg” made by Sayer Ji in his article The Dark Side of Wheat where he likened Celiac to the visible tip of a large iceberg representing the detrimental effects of gluten on the health of everyone that consumes it.
Like ES individuals, Celiac sufferers get immediate and painful feedback.
In the referenced article, Sayer provided evidence that the greatest threat from gluten consumption is deteriorating health, chronic disease, and early death for everyone.
ES sufferers may be telling us the same thing about EMFs. In other words, ES and Celiac sufferers may be the proverbial canaries in a coal mine.

Before addressing the sources of harmful man-made EMF, let’s first look at a source of EMF that has likely been around throughout the evolution of life on this planet. This source involves the Sun and the Earth as shown in Figure 2.

Variations in the number and speed of protons and electrons from the sun produce variations in the Earth’s magnetic field in and around the planet as the magnetosphere acts to shield us from the bulk of incoming particles (See Figure 2).

The Earth’s ionosphere collects those charged particles which leak through the shield and interact with the earth’s surface through cloud-to-ground lightning as well as discharges (currents) between layers of the atmosphere.
These interactions excite various modes of EMF propagation in the spherical shell defined by the Earth’s surface and the ionosphere – a spherical layer separating two differently charged regions (spherical waveguide).
These modes are constrained by the size of the earth and the ionosphere around it.
Since the Earth has rarely been without a magnetic field (except during short periods of polarity reversal), we can assume that these characteristic modes of Sun-driven EMF propagation have been around for perhaps billions of years, and have influenced the development of life on the planet from the very start.

So what does this EMF look like? Figure 3 shows a 4 second time measurement of the magnetic field at a point on the Earth. 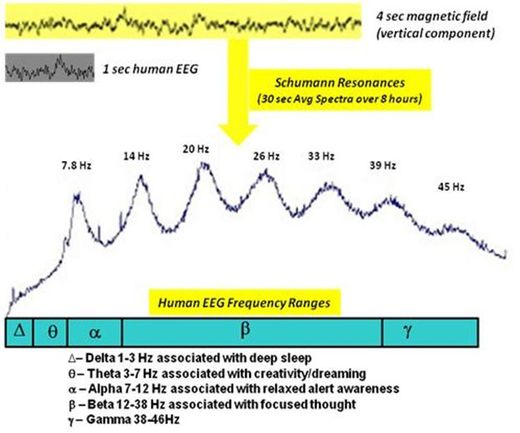 © Sott.net
Figure 3 The human EEG compares very well with the spectrum of Schumann resonances derived from magnetic field measurements on the Earth.
[Adapted from http://en.wikipedia.org/wiki/File:Eeg_raw.svg and http://www.glcoherence.org/monitoring-system/earth-rhythms.html ]

Just below it is a 1 second trace of a human EEG (electroencephalogram).

The time scales are preserved so that we can see that they are very similar in variation.
If we analyze the frequency content of the magnetic field time traces, we find the bumps in the lower graph (Figure 3) to be the Schumann2resonances associated with the earth (actually the earth-ionosphere waveguide).
The primary mode/resonance occurs at 7.8 Hz (cycles per second) – a spot squarely in the range of the alpha wave component of the human EEG [alpha wave dominance in the human EEG is associated with relaxed alert awareness].
These Schumann resonances extend out to about 45 Hz and span a range closely matched to the human (and probably other animals) EEG range.

So what we have here is an EMF source that has likely been ingrained into our evolutionary development from the earliest of times.

It is part of our ‘home’ environment and is seemingly expressed in the signals of each human brain.
As above, so below?

This EMF source likely provides a homeostatic balancing function for life forms (including humans) and suggests the question:

What happens if this EMF is masked or dominated by other environmental EMFs?
Do we cascade toward chronic diseases of the mind and body?
Is this what’s happening to the bees (and other animals)?

We do know that severe solar storms alter these natural EMFs significantly and can last for several days.

These periods have been linked to illness, depression, and suicide – some of the same effects of known EMF source exposure in many people.
This link to severe solar storms might just be a clue suggesting that it is not man-made EMF exposure alone that is the problem; it is the masking of the natural EMF over long periods that causes or contributes to many disease conditions including the symptoms of ES.

If the earth had no magnetic field, there would be little shielding of high energy charged particles from the sun – a very harsh environment for the development of life3.

It is estimated that the earth has had a substantial magnetic field for about 3.5 billion years4.
It would be no surprise to find that life forms evolved to make use of this field for navigation and possibly other purposes – and that these capabilities are still in use today.
Figure 4 illustrates this on a rough timeline showing the development of magnetotactic bacteria, birds, humans, and the beginning of electrification (about 130 years ago).
Much of the life on this planet may express this heritage in latent or unknown forms. For example, cows and wild deer tend to align their bodies north-south while relaxing, but not when the animals are under high voltage power lines.

Over the last two decades there have been many peer reviewed papers suggesting effects due to geomagnetic variation on humans including melatonin production in the pineal, behavior, depression/suicide, heart rate disturbance, arterial blood pressure, EEG, sudden infant death syndrome, and other biological effects. All this research activity suggests that even the human animal is very much connected to the primordial through earth-sun geomagnetic phenomena. This research also suggests, indirectly, that man-made EMFs may interfere with the natural signaling that we all depend on to maintain healthy functioning minds and bodies.

In the next part to this series we’ll begin with man-made EMF sources and what significant past studies suggest regarding the health effects of these sources.

2. Measurement of Schumann waves is currently being studied for earthquake prediction. A success rate of 85% is claimed within 100 square miles of a sensor suite. “Schumann resonances also have gone beyond the boundaries of physics, into medicine, where it has raised interest in the interactions between planetary rhythms and human health and behavior” (for more detail see, here).

3. Only 1% of solar wind energy is coupled to the magnetosphere, and most of this remains contained and isolated from the earth surface. [PDF]

4. A paleomagnetic study of Australian red dacite and pillow basalt has estimated the magnetic field to have been present since at least 3.45 billion years ago (wikipedia.org)

Comment: To learn more about EMF’s and their effects on people, you can continue reading the rest of the series here:

Listen to SOTT Radio Network’s Health and Wellness show on EMF Exposure to learn more about man-made sources of EMF, past study results, what you can do to measure your EMF exposure, and what steps you can take to minimize it.

EMF pollution – What is EMF? Reblogged from source with Thanks Via SOTT @ https://www.sott.net/article/295865-EMF-pollution-What-is-EMF